My friend Chase recently took a road trip from New York to New Orleans with his girlfriend Jessica. They stopped in Memphis to see his family and show Jessica around town. We got together for a ride and a cup of coffee and lots of water. At the end of the ride I took a few pictures of their bikes and Chase told me the story of his Gaulzetti Cazzo. I would just butcher the story so I had him write it down.

“Ok. So I met Craig Gaulzetti when he booked my band to play with his on their 10 year reunion gig in Boston. It was a Sunday, and Father’s Day, and it turns out everyone we know our age has kids and better shit to do. The only people at the gig we a few friends, girlfriends, and like Justin Spinelli (Saeco-Cannondale) and Lucas Brunelle (old mess-bro). We played to basically them. Craig wound up paying our gas money out of his own pocket.

After the gig, Craig let us park our gear in the mechanics area of the shop he ran. We opened a bottle of Bulleit Rye and I told him I wanted one of his bikes. Since we met through music, I jokingly suggested the Iron Maiden typeface and he agreed. Months later I got around to putting down a deposit and talking geometry. On paper, the numbers were radically different than my previous custom bike. Talked to a few people, including Richard Sachs who rode a Gaulzetti, and they all said “Trust Craig.” Brought up the Iron Maiden thing jokingly again and he still agreed.

Got hit in May 2013, broke right ankle and snapped ball of left hip off, called Craig from the ER, “No rush. But the bike is metal and now I’m metal and I’m serious about that Maiden thing.” April ’14 I had been commuting and was ready to start real riding, the bike was ready. Anyway, rode it a bit, seemed fine, but couldn’t really tell as I wasn’t able to push the thing. Bone death set in. Stopped riding again Jan ’15, got the hip replaced, started riding again April ’16. Several park laps and 3 real road rides, so far.

Parts are a mix of SRAM- because I prefer the shifting mechanism- mid-level Campy wheels with a Fulcrum free hub body to work with the drivetrain, and Shimano pedals. Stuff that is bombproof and I know works. The bike is flawless, no bad behavior. Nothing bad to say about it at all, so it’s perfect. Just did 30.1 miles in Asheville with 4000 ft of climbing and a 7-mile gravel descent on 25mm tires. I’d fail well before it ever would. The bike rips. TRUST CRAIG.

(The Cazzo is Pego-Richie tubing, which I believe is just Columbus Spirit for lugs, but welded- this one by Kelly Bedford- if you care about that stuff. It’s two triangles of selected tubing, competently joined, with the wheels in the right place. Trust Craig)” 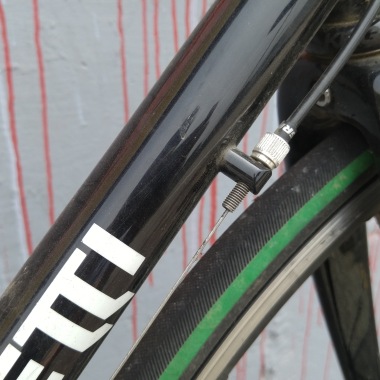 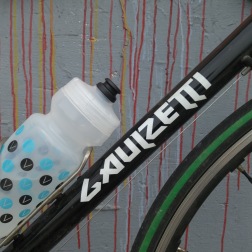 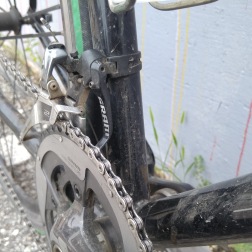 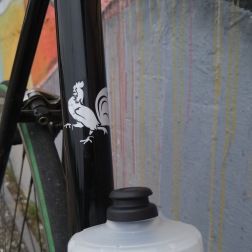 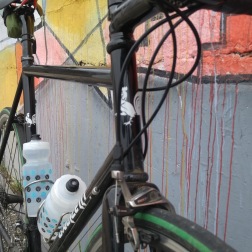 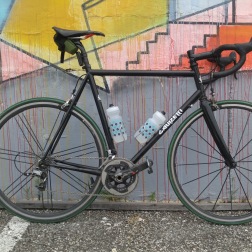